VOTE FOR LOVE OF YOUR COUNTRY

Power outages at hundreds of gas stations and a distribution bottleneck due to flooding damage and power loss has caused a gasoline shortage in the New York metropolitan area that may not be cleared up for at least a week, according to industry experts.

What was a problem for drivers when Super Storm Sandy ended two days ago has become a nightmare for frazzled motorists who find themselves in gas lines that can stretch on for hours. Some lines were hundreds of cars long in sections of New Jersey and New York Thursday, and in a number of locations police monitored the lines which interfered with traffic flow in some areas.

The problem is not gasoline supplies, but the ability to distribute it, especially from the critical terminal area around Linden, N.J., which lost power and was hit by storm surge. An estimated 75 percent or more of the gas stations in New Jersey were closed either because they had no gasoline, no power or both, said Sal Risalvato, executive director of the N.J. Gasoline, Convenience, Automotive Association. His organization represents about 1,000 gasoline stations in N.J.

“What I’m seeing is there’s a combination of problems. Power is at the root of it. That means gasoline that is already in inventory, already refined in those big tanks you see along the side of the turnpike, they can‘t get that gasoline into the delivery trucks without power,” said Risalvato.

Those “white tanks” along the New Jersey turnpike are gasoline terminals, owned by a number of companies, and the question for the industry is how quickly can normal operations resume after power is restored. A number of New Jersey based companies, like NuStar

and Shell’s Motiva, reported that the storm surge drove water into the terminal areas, and it is unclear when they will be operational. One NuStar Energy executive estimated the marine terminals at his site could take four to six weeks to repair.

, which powers that critical region, expects its substation to be back in working order and have electricity running to the critical chokepoint area by Saturday.

“We are focused on the major refineries area in Woodbridge, Linden, Elizabeth part of New Jersey. We expect to have the substations back by late tomorrow/Saturday, so what that means is power will be restored to that region,” said PSE&G CEO Ralph Izzo on “Fast Money Half-Time Report.”

“Now if there’s a specific set of circumstances to a particular customer in that region that will push it out further, but that region will be able to receive power Saturday,” he said.

Izzo said PSE&G has a list of critical locations that are a top priority. That includes hospitals but also refineries. Izzo said residential customers, which could include gas stations, should have power by the middle of next week at the latest. There are still about 780,000 PSE&G customers without power, and other utilities also serve New Jersey. 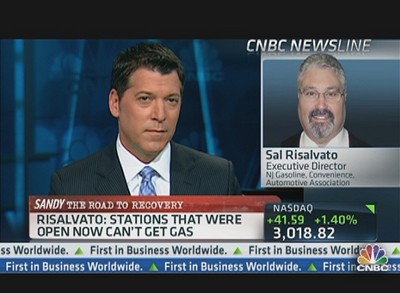 The refineries that remain out of commission, especially the giant gasoline-producing Phillips 66 Bayway refinery, are not at the root of the current supply shortage. It is mainly the result of trucks not able to pick up deliveries or make deliveries.

“I feel like Linden is still quite the mess,” said Andrew Lipow, president of Lipow Oil Associates. He said the energy operations in that area are responsible for about three-quarters of the fuel consumed in the New York metropolitan area. “There’s really no amount of catch up that the system can do with all of the Jersey terminals shut down.”

There has been some progress. The Colonial Pipeline—which brings gasoline from the Gulf Coast to the Northeast—was hoping to resume partial operations Friday. Also, the U.S. Coast Guard Thursday said it was opening the Port of New York and New Jersey on a restricted basis to get gasoline and fuel into the area.

Permanent link to this article: https://www.peytonspaces.com/2012/11/02/east-coast-gas-shortages-may-not-end-for-a-week-hurricane-sandy/