Do Extraterrestrial Beings Exist? We hope so! 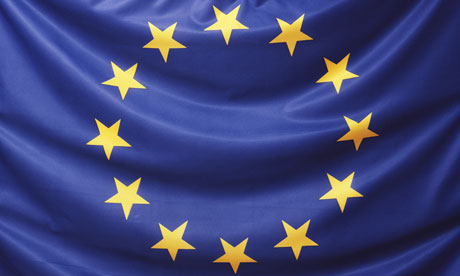 Debt crisis sets markets in turmoil amid reports of talks about the break up of the eurozone. Photograph: Jeff Spielman/Getty Images

Fears that Europe’s sovereign debt crisis was spiralling out of control have intensified as political chaos in Athens and Rome, and looming recession, created panic on world markets.

Reports emerging from Brussels said that Germany and France had begun preliminary talks on a break-up of the eurozone, amid fears that Italy would be too big to rescue.

Despite Silvio Berlusconi‘s announcement that he would step down as prime minister once austerity measures were pushed through parliament, a collapse of investor confidence in the eurozone’s third-biggest economy sent interest rates in Italy to the levels that triggered bailouts in Portugal, Greece and Ireland.

Italian bond yields surged through the critical 7% mark, at one point hitting 7.5%, amid concern that the deteriorating situation had moved the crisis into a dangerous new phase.

In Athens talks to appoint a prime minister to succeed George Papandreou were in deadlock, and will resume on Thursday morning. The Italian president, Giorgio Napolitano, sought to reassure the markets by promising that Berlusconi would be leaving office soon.

Angela Merkel, the German chancellor, said the situation had become “unpleasant”, and called for eurozone members to accelerate plans for closer political integration. “It is time for a breakthrough to a new Europe,” she said. “Because the world is changing so much, we must be prepared to answer the challenges. That will mean more Europe, not less Europe.”

The president of the European commission, José Manuel Barroso, issued a new call for the EU to “unite or face irrelevance” in the face of the mounting economic crisis in Italy. “We are witnessing fundamental changes to the economic and geopolitical order that have convinced me that Europe needs to advance now together or risk fragmentation. Europe must either transform itself or it will decline. We are in a defining moment where we either unite or face irrelevance,” he said.

Senior policymakers in Paris, Berlin and Brussels are reported to have discussed the possibility of one or more countries leaving the eurozone, while the remaining core pushes on toward deeper economic integration, including on tax and fiscal policy. “France and Germany have had intense consultations on this issue over the last months, at all levels,” a senior EU official in Brussels told Reuters, speaking on condition of anonymity because of the sensitivity of the discussions.

Financial regulators across Europe were last night carefully monitoring the health of their heavily exposed banks, amid concern that the turmoil could lead to a debt default, or even the break-up of the euro.

George Osborne, just three weeks away from delivering his autumn statement on the health of the economy, believes Europe’s problems are blighting the UK’s growth prospects, but he will use the sell-off of Italian bonds to insist there is no alternative to his austerity plans.

Nick Clegg, the deputy prime minister, spent Wednesday in Brussels urging the council president, Herman Van Rompuy, and a clutch of EU commissioners to focus on growth, and not further treaty changes, warning that if Europe does not become more competitive it will end up in a spiral of perpetual decline. Both he and David Cameron are urging EU integrationists to recognise that EU Treaty changes in the next few months  would be a massive distraction and no cure for the underlying economic crisis. He pointed out that they would require referendums in at least four countries.

The latest chapter in the ongoing sovereign debt crisis came as Bank of England policymakers gathered for their monthly two-day interest rate-setting meeting. The monetary policy committee announced £75bn-worth of quantitative easing last month in an effort to prevent a recession.

City analysts believe the renewed turmoil in the eurozone is pointing to a deep recession in Europe. “It’s unavoidable that there will be an outright contraction in the fourth quarter of this year, and a 60%-70% chance of another decline in the first quarter of next year,” said Nick Parsons, head of strategy at National Australia Bank.

Christine Lagarde, head of the IMF, told a financial forum in Beijing that Europe’s debt crisis risked plunging the global economy into a Japan-style “lost decade” of weak growth and deflation.

“Our sense is that if we do not act boldly and if we do not act together, the economy around the world runs the risk of a downward spiral of uncertainty, financial instability and potential collapse of global demand … we could run the risk of what some commentators are already calling the lost decade.”

Simon Derrick, currency strategist at BNY Mellon, said: “We’re at the point of asking the question, if I put my money into Italy, am I going to get it back? The fact is, there isn’t a safety net.” He added that the mood in the City  was reminiscent of Black Wednesday, in September 1992, when the UK crashed out of the European Exchange Rate Mechanism.

The surge in Italian bond yields was eventually capped by the European Central Bank, which intervened in the markets to buy limited quantities of Italian debt. But analysts say the ECB will eventually have to step up its action, and act as a lender of last resort to bring interest rates down to pre-crisis levels. Sony Kapoor, director of Brussels-based think-tank Re-Define, said: “We may be fairly close to the point where an existential threat to the eurozone, and hence the ECB, is on the horizon. This could easily spiral out of control.”

The ECB is seen as the only institution with the firepower to rescue Italy, because the EU lacks the resources to bail out such a large economy. Ben May, of Capital Economics, said Italy would need a €650bn bailout to keep it out of financial markets for the next three years or so. “The European Financial Stability Facility will not be able to provide a bailout of this size,” he said.

Officials in Brussels insisted on Wednesday there would be no rescue package for Rome, saying, “financial assistance is not on the cards”. A key test will come on Thursday morning when Italy has to raise €5bn from investors on the bond market.

Economic and monetary affairs commissioner Olli Rehn ratcheted up the political pressure on Italy with a strongly-worded letter to finance minister Giulio Tremonti. In it, Rehn demanded concrete written details of how Italy will implement each of the 39 separate reform measures it has promised to undertake.

In Rome the head of state, Giorgio Napolitano, insisted that Berlusconi would be leaving office soon, and that his departure would not be the prelude to a lengthy period of political instability.

His intervention came after hurried consultations with the speakers of both houses of parliament to ensure the speediest possible approval for a package of economic reform and austerity measures agreed with the European institutions. On Tuesday evening, after losing his majority in the chamber of deputies, Berlusconi told Napolitano he would resign.

But, to prevent the economic measures being blocked by the fall of his government, he said he would only go once the package had been approved.

As concern grew that he might delay the passage of the legislation, which has become a litmus test of Italy’s credibility in the markets, Berlusconi said he would insist on holding new elections and one of his ministers speculated that could be next February.

After the yield on Italy’s benchmark bonds soared above 7%, taking interest rates to a level beyond which previous euro zone debt crisis victims have sought a bail-out, the president issued a statement to say the new economic measures would be “approved in the space of a few days” and that there was “no uncertainty over the prime minister’s decision to resign”.

Napolitano, who cannot begin consultations with party leaders until Berlusconi leaves office, said that either a new government would be formed “to take every necessary decision” or an election would be held “within the shortest time”.

That would still mean a vote was not held until January. But a source close to the president stressed to the Guardian that “early elections are not a foregone conclusion.”

Permanent link to this article: https://www.peytonspaces.com/2011/11/10/the-breakup/