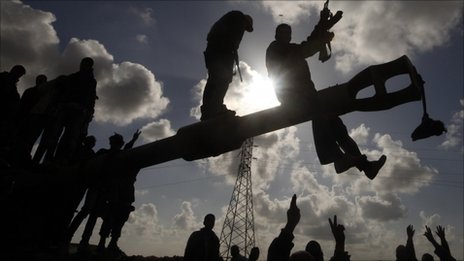 French jets have launched a second day of operations over Libya to enforce a no-fly zone against Col Muammar Gaddafi’s forces.

The 15 planes patrolled Libyan airspace but did not open fire because they met no resistance, a spokesman said.

Meanwhile, witnesses in the capital, Tripoli, reported a loud explosion. A plume of smoke was seen rising near Col Gaddafi’s residence, AFP reported.

France also says Qatar is to about to deploy four planes to the operation.

The move would make Qatar the first Arab country to play an active part in the campaign against Col Gaddafi, who has been battling a month-long revolt.

In a statement from the Pentagon on Sunday, US Vice Admiral William Gortney said coalition raids were “judged to have been very effective” and no new Libyan air activity had been reported.

“Benghazi is not completely safe from attack but it is certainly under less threat than it was yesterday,” he said.

“We believe his [Gaddafi’s] forces are under considerable stress and suffering from isolation and a good deal of confusion.”

The head of the Arab League, who supported the idea of a no-fly zone, has criticised the severity of the bombardment.

If Western aircraft hadn’t taken to the skies over Libya, they believe in Tobruk they’d have been fighting for their lives with heavy machine guns, not firing from the rooftop to celebrate their deliverance.

Mustafa Gheriani, one of the rebels’ spokesmen, fled Benghazi as Col Gaddafi’s tanks approached. Now he is returning, confident that British, American and French air power have made it safe.

“The intervention of the international community lessened the bloodshed and quickened his demise,” he said, “and we’re looking forward to that, in hours or days instead of weeks.”

There is much grimmer news, though, from Misrata, the last city near to the capital, Tripoli, to be resisting Muammar Gaddafi’s vengeful counter-revolutionary surge.

Local people say tanks and rocket launchers are maintaining a merciless bombardment of the city centre. Snipers are shooting civilians who venture into the shattered streets.

The news from Misrata is a sharp reminder that the arsenals deployed by the allied air forces do not include a magic bullet to resolve this crisis.

“What is happening in Libya differs from the aim of imposing a no-fly zone, and what we want is the protection of civilians and not the bombardment of more civilians,” said Arab League Secretary General Amr Moussa.

Arab League support was a key factor in getting UN Security Council backing for the resolution authorising the move.

The BBC’s Jonathan Head, in Cairo, says this looks like a worrying crack in the coalition. Western governments are counting on at least symbolic participation by the air forces of some Arab states, he adds.

In a news conference on Sunday, a Libyan military spokesman said its armed forces had ordered a ceasefire across the entire country, beginning at 2100 local time (1900 GMT).

However, the BBC’s Allan Little in Tripoli says the government had been insisting that its troops were already observing a ceasefire order made on Friday.

Despite Friday’s announcement, our correspondent adds, pro-Gaddafi troops have tried to enter Benghazi and have been in action at Misrata.

A rebel spokesman in Misrata told the BBC that pro-Gaddafi forces had launched fresh attacks on Sunday with heavy shelling.

Meanwhile, US military chief Adm Mike Mullen said the initial coalition raids on Libya on Saturday night had been “successful”.

US fighter planes and B-2 stealth bombers were involved, Pentagon officials said.

Cruise missiles hit at least 20 air-defence sites in the capital, Tripoli, and the western city of Misrata, they said.

After an attack by French planes near the rebel-held city of Benghazi, some 14 bodies were lying near destroyed military vehicles, Reuters reported.

Libyan TV has broadcast footage it says showed some of the 150 people it claims were wounded in the attacks. It said 48 people had been killed. There was no independent confirmation of the deaths and Western officials said such claims should be treated with caution.

The world is a dangerous play.  peyton

Permanent link to this article: https://www.peytonspaces.com/2011/03/20/libya-french-jets-resume-sorties-as-coalition-builds/